You might instruct your kitten to “sit” and when the cat successfully sits, you might reward the kitten with a special treat while simultaneously saying “good job” (in an encouraging vocal tone).  In this example of training your kitten to sit, the treat would be considered the primary reinforcer and the vocal encouragement (i.e. “good job”) would be considered the secondary reinforcer.

What is psychological reinforcement?

The definition of psychological reinforcement is strengthening or promoting a behavior or response via introduction of a stimulus.  Reinforced behavior is behavior that’s likely to be repeated in the future.

For example, if a child is given food for exercising – the food would be considered the reinforcer and exercising would be the promoted behavior.  By reinforcing a child’s behavior by presenting food, the child is likely to repeat the behavior of exercise in the future.

Rumor has it that Arnold Schwarzenegger’s dad made him do push-ups and sit-ups (desired behavior) to “earn” his breakfast (reward).  Essentially, his dad was using primary reinforcement by presenting Arnold with a meal after he had completed his morning exercise.

1. Pavlov’s dog experiment: One of the most popular examples of secondary or conditioned reinforcement was demonstrated by Ivan Pavlov’s experiment of classical conditioning. In this experiment, Pavlov rings a bell and immediately delivers food to the dogs (resulting in salivation).

Repeating this process of ringing a bell and delivering food to the dogs – leads them to mentally “associate” the bell ringing with food delivery.  As a result, the dogs will begin to salivate following bell rings even if food isn’t delivered.

Eventually, the dog will learn to associate the click with sitting – such that each time there’s a click in the future, the dog sits (even without the treat).  In this case, the “clicking” noise would be considered a secondary reinforcer (or one that the dog has mentally associated with the primary reinforcer of a treat).

5. Tokens or “gold stars”: Tokens may be used in some settings to reward people for good behavior. For example, residents of a group home might receive tokens or “gold stars” for engaging in household chores (e.g. doing the dishes, vacuuming, making their bed, etc.).

With adequate accumulation of tokens or gold stars, the person who acquires them may be treated with gourmet meal.  Essentially, these tokens reward persons who help maintain the cleanliness of the house – and are only desired insofar as they are mentally associated with the gourmet meal.

6. Good grades: Receiving good grades in school may be a secondary reinforcer for some children. Many children are given special rewards or privileges from parents and/or teachers such as: pizza parties, ice cream, going to a movie, and/or a special toy.

Although the attainment of good grades does not directly satisfy any basic biological need – it might be mentally associated with things a child desires (e.g. tasty foods, going to movies, etc.).  As a result, the child may be more motivated to get good grades in the future – knowing that a reward is awaiting.

Behavior chaining is known to utilize primary reinforcement and secondary reinforcement to generate a specific behavior.  With a long enough “chain” or sequence of behavioral responses – a complex behavior is formed.

Next, the teenager reaches into his/her pocket for a wallet and pulls out a five-dollar bill and places an order for a cheeseburger and French fries.  Thereafter, the teenager eats the meal and exits the restaurant.

If you analyze this example, you’ll realize that the entire complex behavior was divided into a chain of individual responses and reinforcers – all of which stemmed from the biological incentive to satisfy hunger.

Had the action or behavior of digging out of a wallet not been reinforced, the chain of behaviors would be broken.  If we examine the aforementioned example of behavioral chaining, the reinforcements can be classified as either “primary” or “secondary.”

Satisfying hunger as a result of consuming the burger and French fries is an example of primary reinforcement (as this satisfies a biological urge), whereas all other reinforcers would be classified as secondary reinforcement (they are learned and do not directly satisfy biological urges).  Behavioral chaining is often effective for teaching productive complex behaviors to children with autism. 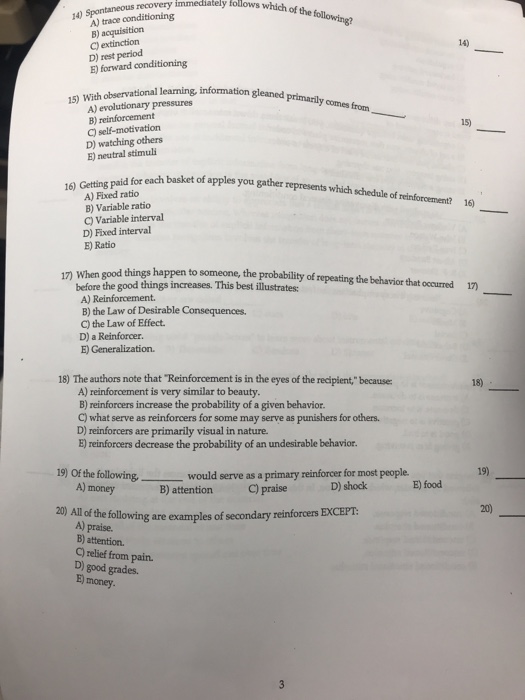 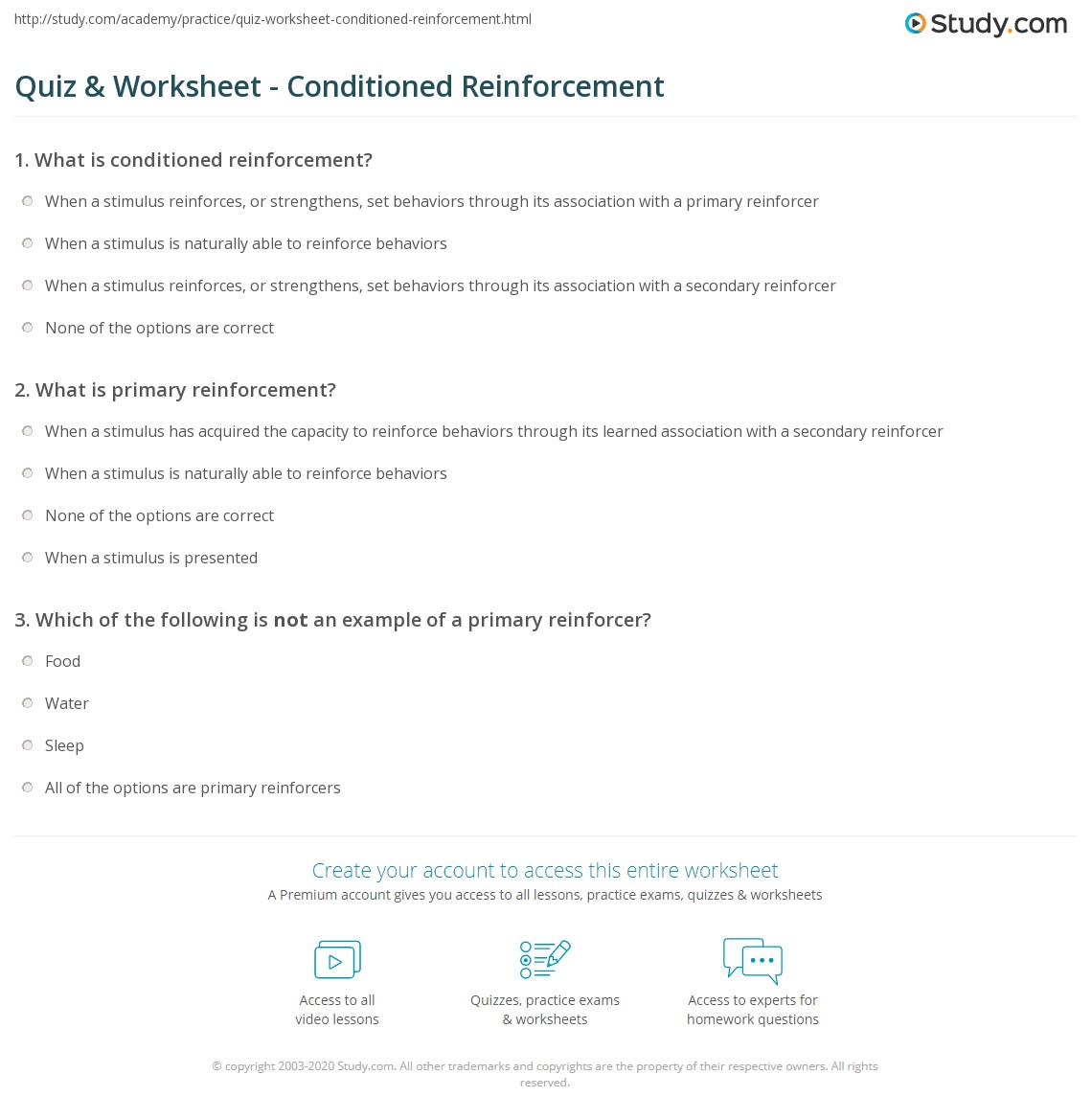 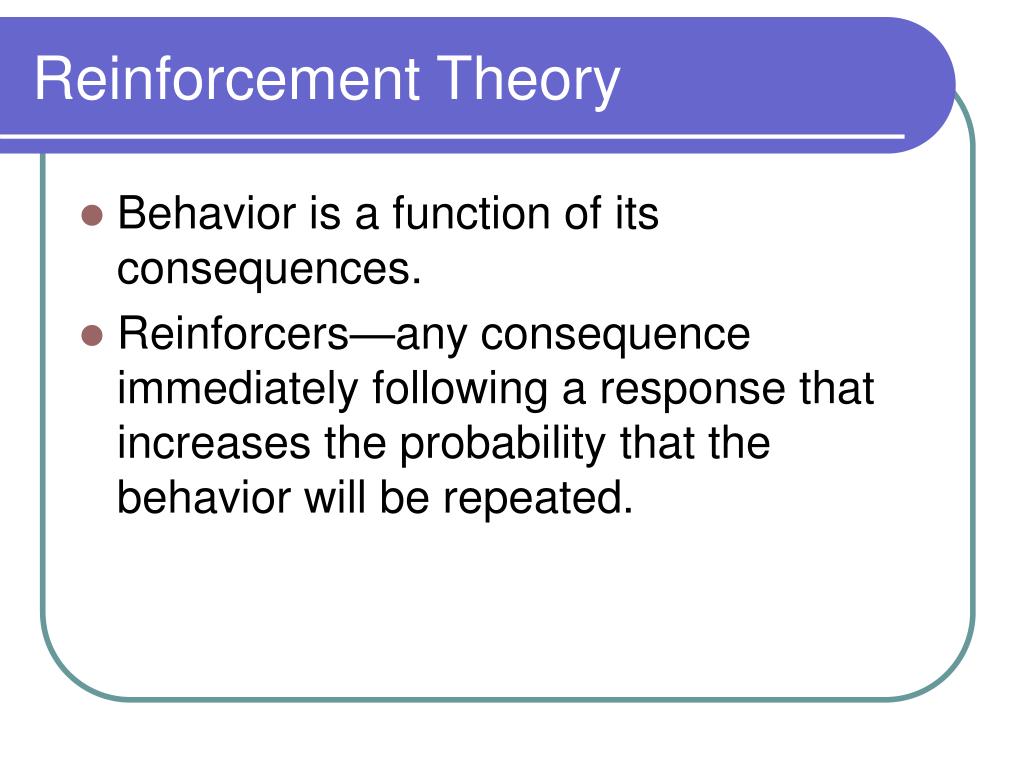 What Is A Conditioned Reinforcer? ABA – hi my name is Kate Harrison I'm a board
certified behavior analyst and a behavior consultant with Brett DiNovi and associates today I'm going to be talking to you about the bacb task FK 18
of the fourth edition task list conditioned reinforcement and why this
is an important term to be familiar with with your application of applied
behavior analysis have you ever been in a situation where you a parent or a
colleague has said something along the lines of she just doesn't have any
reinforcers or maybe it sounded like you will only work through the gummies or
how about he doesn't want any of his reinforcers behavior analysts we should
always be programming for generalization which requires us to evaluate the
reinforcing potential of contingencies in the natural environment to many of
the individuals that we work with these natural contingencies do not without
intentional pairing service reinforcers additionally we must consider the
environment and motivating operations when considering a similary enforcing
value a stimulus may serve as a reinforcer for an individual in one
environment under certain circumstances but may not serve as a reinforcer for
the same individual in a different environment under different
circumstances and finally like the examples mentioned earlier we may be
working with an individual who has a limited repertoire of reinforcing
stimuli in which the potential for satiation is quite high if you've ever
been in a situation where your learner has become satiated to your entire bank
of reinforcers you know what a challenge this presents in making meaningful
progress in their 2014 research taylor santa and colleagues label
identification of reinforcers as an essential step in developing
interventions for individuals with autism and go on to share that while the
field has established a large body of research on individual preferences of
available reinforcers there's limited research on specific recommendations for
how to conduct or evaluate conditioning procedures let's review some terminology
reinforcements regardless of whether it's conditioned or unconditioned a
reinforcer has the defining characteristic of increasing future
probability of targeted behaviors unconditioned reinforcer this is a
stimulus change that increases future occurrences of targeted behaviors and
the unconditioned means that this occurs without any prior learning history an
unconditioned reinforcer is also called a primary or unlearned reinforcer an
example would be something like a snack conditioned reinforcer this is a
previously neutral stimulus that following the pairing with an
unconditioned or pairing with previously conditioned reinforcing stimuli has
acquired the same reinforcing effects as the stimulus in which it was paired a
conditioned reinforcer is sometimes called a secondary or learned reinforcer
an example would be something like a high-five a doll or play-doh if these
items increase future behavior through conditioning procedures we have the
opportunity to develop new reinforcers introduced generalized conditioned
reinforcement like token economy systems and the potential to expand a learner's
interest and novel activities conditioning reinforcer should be
carefully considered in programming in addition to assessing reinforcer
preference prior to proceeding with any pairing procedures the item should be
presented to the learner to see if it sparks any interest they learn
colleagues review five different pairing procedures used to condition reinforcers
trace pairing this is when the neutral stimulus is presented and then
terminated before the presentation of the reinforcing stimulus stimulus
pairing this happens when a neutral stimulus and a reinforcing stimulus are
presented and terminated at the same time response stimulus pairing this is
when the just mentioned simultaneous pairing procedure is used but only
contingent upon a response delay pairing this is what a neutral stimulus is
presented before and with a little bit of overlap with the presentation of the
reinforcing stimulus pairing using a discrimination training procedure this
is when the neutral stimulus is first established as a discriminative stimulus
or SD reinforcing a specific response in its
presence depending on the individual the above-mentioned methods for conditioning
reinforcers have each displayed success in conditioning new reinforcers for
individuals Cooper and colleagues note that there aren't any standards for
physical properties that determine a stimuli x' permanent status as a
reinforcer in one condition a simulus may serve as a reinforcer but
it might serve as a Punisher in another condition it is for this reason that a
be a clinician should be familiar with not only conducting preference
assessments for current repertoires of reinforcers but also for how to develop
new reinforcers by conditioning novel stimuli behavior analysis could benefit
by expanding on current research to a point in which specific recommendations
could be made to guide clinicians in conditioning reinforcers determining how
to maintain the reinforcing effectiveness of a previously neutral
stimuli would be essential in creating such a technology do you incorporate
conditioning procedures to expand reinforcers in your ABA programming do
teach it to your staff we want to hear from you leave your comments in the
notes below thanks for watching .