The Shut-Down Condition In Economics

The Shut-Down Condition in Economics

Production in the Short Run

Economists distinguish the short run from the long run in competitive markets by, among other things, noting that in the short run companies that have decided to enter an industry have already paid their fixed costs and can’t fully exit an industry. For example, over short time horizons, many companies are committed to paying a lease on office or retail space and must do so regardless of whether or not they produce any output.

In economic terms, these up-front costs are considered ​sunk costs- costs that have already been paid (or have been committed to be paid) and can’t be recovered. (Note, however, that the cost of the lease wouldn’t be a sunk cost if the company could sublet the space to another company.) If, in the short run, a firm in a competitive market faces these sunk costs, how does it decide when to produce output and when to shut down and produce nothing?

Profit if a Firm Decides to Produce

If a firm decides to produce output, it will select the quantity of output that maximizes its profit (or, if positive profit is not possible, minimizes its loss). Its profit will then be equal to its total revenue minus total cost. With a little arithmetic manipulation as well as the definitions of revenue and costs, we can also say that profit is equal to output price times quantity produced minus total fixed cost minus total variable cost.

Profit if a Firm Decides to Shut Down

Intuitively, a firm wants to produce if the profit from doing so it at least as large as the profit from shutting down. (Technically, the firm is indifferent between producing and not producing if both options yield the same level of profit.) Therefore, we can compare the profits that we derived in the previous steps to figure out when the firm will actually be willing to produce. To do this, we just set up the appropriate inequality, as shown above.

Fixed Costs and the Shut-Down Condition

We can do a bit of algebra to simplify our shut-down condition and provide a clearer picture. The first thing to notice when we do this is that fixed cost cancels out in our inequality and is therefore not a factor in our decision regarding whether or not to shut down. This makes sense since the fixed cost is present regardless of which course of action is taken and therefore logically shouldn’t be a factor in the decision.

We can simplify the inequality even further and arrive at the conclusion that the firm will want to produce if the price it receives for its output is at least as large as its average variable cost of production at the profit-maximizing quantity of output, as shown above.

The observation that a firm will produce in the short run if it receives a price for its output that is at least a large as the minimum average variable cost it can achieve is known as the shut-down condition.

The Shut-Down Condition in Graph Form

We can also show the shut-down condition graphically. In the diagram above, the firm will be willing to produce at prices greater than or equal to Pmin, since this is the minimum value of the average variable cost curve. At prices below Pmin, the firm will decide to shut down and produce a quantity of zero instead.

Some Notes About the Shut-Down Condition

It’s important to keep in mind that the shut-down condition is a short-run phenomenon, and the condition for a firm to stay in an industry in the long run is not the same as the shut-down condition. This is because, in the short run, a firm might produce even if producing results in an economic loss because not producing would result in an even bigger loss. (In other words, producing is beneficial if it at least brings in enough revenue to start covering the sunk fixed costs.)

It’s also helpful to note that, while the shut-down condition was described here in the context of a firm in a competitive market, the logic that a firm will be willing to produce in the short run as long as the revenue from doing so covers the variable (i.e. recoverable) costs of production holds for companies in any type of market.

Perfect Competition – The Shut Down Price | tutor2u – Short-Run Shut-Down Decision of a Perfectly Competitive Firm To do 1 min read If a firm shuts down operation in the short-run, it will incur a loss equal to its Total Fixed Cost (TFC) because no variable cost will be incurred.If all fixed costs are non-sunk, then (a competitive) firm would shut down if the price were below average total costs. Short-run shutdown compared to long-run exit. A decision to shut down means that the firm is temporarily suspending production. It does not mean that the firm is going out of business (exiting the industry).Question 29 A monopolistically competitive firm will shut down in the short run if: Not yet answered Marked out of 1.00 Select one: a. It can not cover its fixed costs. Flag question b. If it can not cover its total costs. C. If it can not attain normal profits. O d. If it can not cover its variable costs. 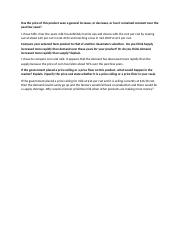 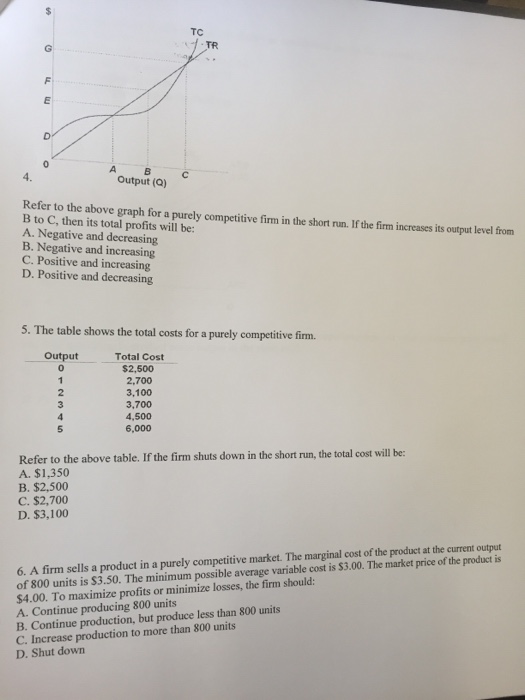 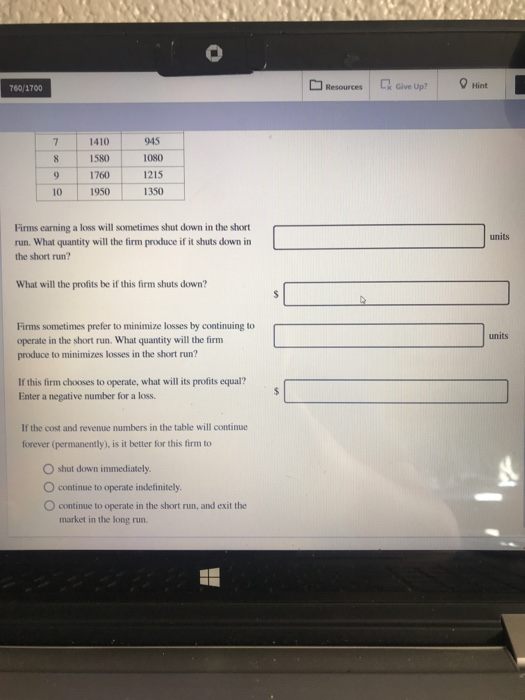 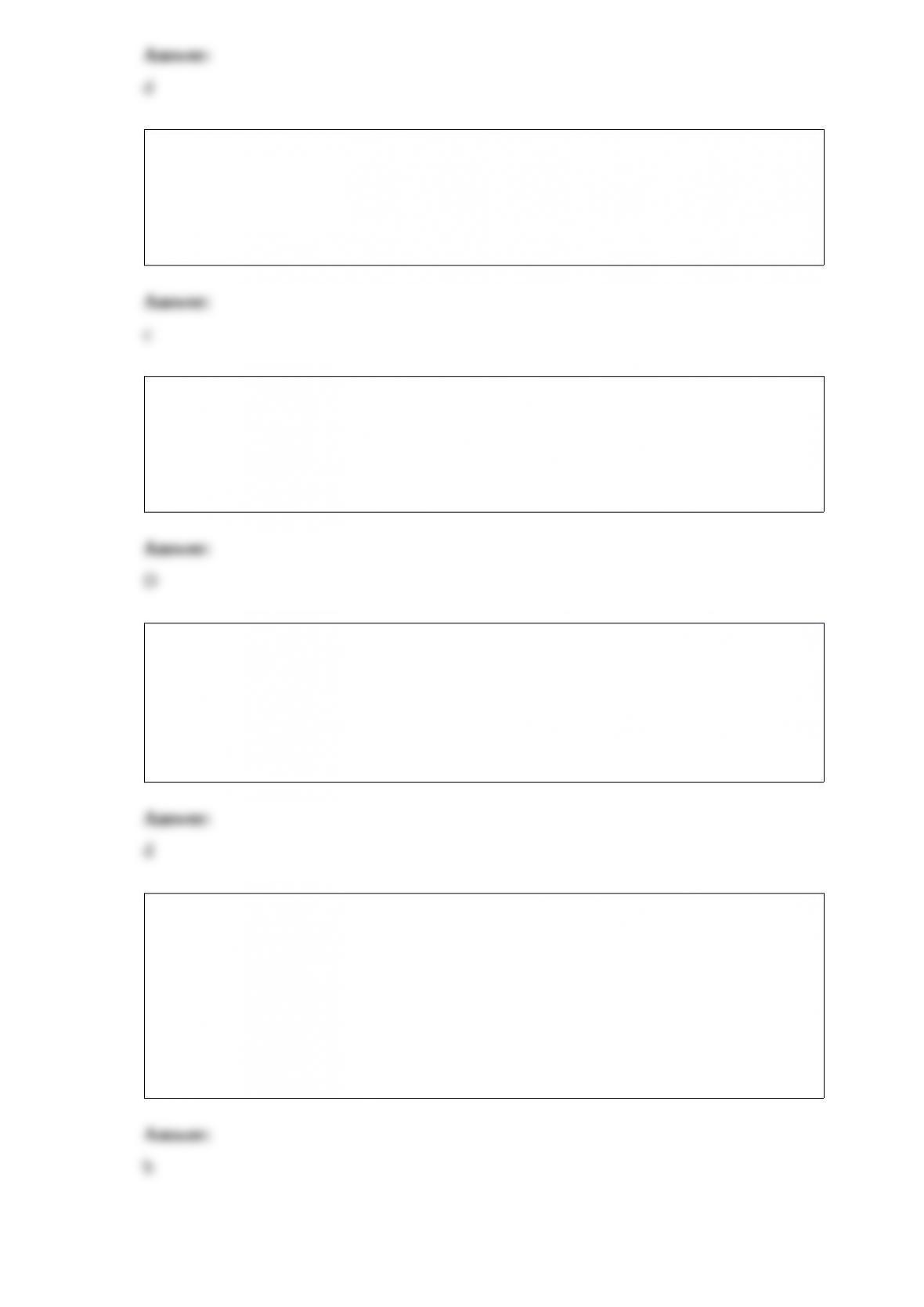